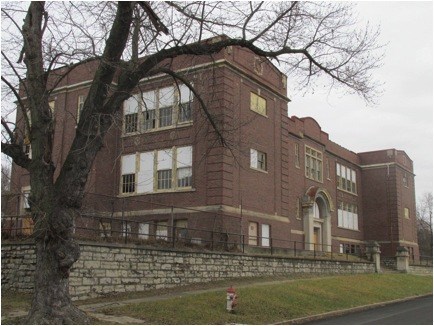 One of the great things about St. Joseph is the variety of historic buildings that can be purchased at reasonable prices. With these structures the only limitation is your imagination!

One of those historic buildings is Washington School at 1015 N. 5th St.

The current building was built in 1909 during an era when the St. Joseph School District was undergoing a building boom due to increasing enrollments. This building replaced an a smaller structure on the same site. Noted St. Joseph architectural firm of Eckel and Boschen were awarded the contract to design the school and local contractor J.W. Lehr was engaged to build the new building. A budget of $35,000 was allocated for the structure. There were significant cost overruns, and the architect E.J. Eckel had to appear in front of the school board to justify what was seen as excessive use of structural steel and iron. There exists a memorandum from J.W. Lehr Company to the Eckel firm dated July 19, 1909 setting out ways to reduce costs by altering the materials used; eg. changing the stone cornices to galvanized iron.

The School District continued to spend money on the building to make it more useful and in line with current thinking concerning education. In 1929 a $2,180,000 bond was issued. The allocation for the addition on Washington school was $26,300. In September 1931, 286 students were enrolled at Washington. Washington’s enrollment increased in 1933 when the district disbanded Longfellow School for regular education and some of its students were enrolled at Washington (others went to Everett, Edison, and Webster.).

In 1952 improvements were made to the buildings throughout the district. Washington along with Webster and Sherwood had improvements made to its playground. The recreation area was graded and two inches of bituminous coating was applied. That same year the School District engaged the architectural firm of Eckel and Aldrich (Eckel had been the original architect of the building) to alter the configuration of the basement to incorporate a “Crippled Children’s Room.”

As the city entered the 1970s, shifting residential patterns meant that Washington School was experiencing declining enrollment. In 1973 the decision was taken to close the elementary school. Its students were divided between Humboldt and Webster Schools. The building did service for two additional years as a temporary middle school until Robidoux Middle School was completed. The School District abandoned the structure in 1974.

Since 1974, the building has suffered from varying degrees of neglect. There was a short-lived attempt to use it as a multi-family residential space (the remains of some of the apartments are still intact) and more recently it served as a sort of warehouse for a wholesale pet fish business. It has been empty for approximately five years.

For more information or to view this property: